When will it end ? 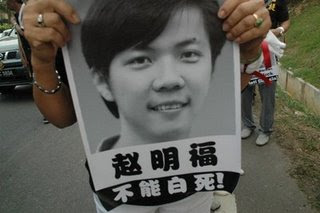 Death in police custody has become rampant. So much so that it no longer shocked the nation. Only when the cruelty of it surfaced in the form of pictures of police brutality splashed across the net, did the nation take notice. Or else it would be treated like the footnote of a book. Read and forgotten.

The authorities it seemed, always have an answer ready. Detainee was under the influence of drugs, intoxicated to the point of being overdose and died. Detainee committed suicide by hanging himself (in a police lock up, how is that possible, explain?). While transporting detainee to another lock up, detainee jumped into the river and drowned (while under police custody, how is that possible, again explain?). A perfectly healthy detainee suddenly developed a bad case of pneumonia and died.

Ganapragasam and Kugan died in police custody. When pictures of physical torture endured by the late Kugan splashed across the internet, it quickly turned into a racial issue. Some questioned on why the public was defending an Indian criminal. Others demanded to know why the minority became the target of such inhumane act.

Kugan was a suspect, yes. But in the eyes of the law, one is innocent until proven guilty.

The majority of the police force are made up of Malays, yes. But there are also Indian, Punjabi and Chinese police personnel.

Teoh Beng Hock, a young man, 30 years of age, an aide to one of the Excos of Selangor Pakatan Rakyat led government, died after being taken to the MACC office for questioning last week. It was reported that he was not even a suspect, merely a witness to the supposedly misused fund worth RM2400 in purchasing 1500 pieces of Malaysia flags. After being questioned for about 10 hours, Beng Hock was found dead within the premise of MACC.

Police classified the death as 'kematian mengejut' or sudden death. Which suggested that he either accidentally fell or committed suicide.

There is no way it could be justified that Beng Hock committed suicide. He was to be married the next day to the mother of his unborn child.

When pushed to the corner, yes back to the good ol' racial card. Government controlled Malay newspapers turned Teoh Beng Hock's death into a racial issue and went as far as to suggest that, to go against MACC is akin in going against a Malay institution. The absurdity of it all!

A life is a life. A life lost is not measured the worth by the ethnicity or the social standing. Teoh Beng Hock was somebody's son, somebody's brother, somebody's fiancee and the father of an unborn baby.

A Royal Commission must be set up. MACC must be investigated on the interrogation techniques applied.

Justice must be given to Teoh Beng Hock,his family and his unborn child.
Posted by Chan Ming Kai at 3:20 PM