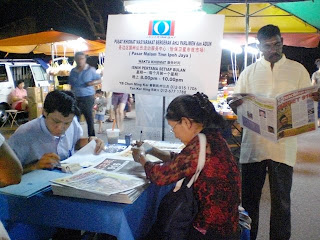 Before I became a YB, I had a 'pasar malam' (flea market) stall in Taman Ipoh Jaya. The items I "sold" were the KeADILan newspaper, free party bulletins, KeADILan membership forms and SPR (Suruhanjaya Pilihanraya) forms. But more importantly, I was 'selling' myself. And that was how voters got to know me.

My pasar malam counter started in 2005. In the beginning, I put it up only on the first Monday of the month. I had to carry my own table and stools there, my dry cell and assemble the bunting and the lighting. When the crowd thinned out, usually around 10 pm, then it was time for me to dismantle everything and carry the stuffs back to my car. When it rained, I got wet. Pretty soon it became a routine.

After sometime, it became twice a month. Nearing the election, it was up on every Monday. Even though back then shoppers were reluctant to approach my counter, I became a familiar face.

During the campaign period, the 'ceramah' which was held there received tremendous turnout. When it was my turn to deliver a speech, I was greeted by shrieks of "Ah Kai!" from the crowd. They treated me like I was their friend.

Now, I have a service center at Ampang which is near to the Ipoh Jaya pasar malam area. My Ampang center operates on every Monday, 8 pm to 10 pm. It is a house, comfortable enough, with chairs for complainants to seat and sheltered from harsh weather.

But my pasar malam counter, the place where started it all, is near and dear to my heart. You can still see me there, now only on the first Monday of the month. I would be there if I do not have any pressing engagements.

You can still see me there, carrying tables and stools and party materials, braving the weather. Now as a YB, shoppers no longer hesitate to approach my 'stall'. But to the many traders there, I am still their friend, 'Ah Kai'.
Posted by Chan Ming Kai at 9:44 AM