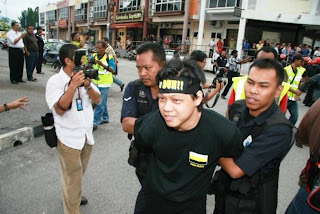 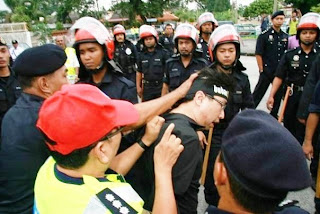 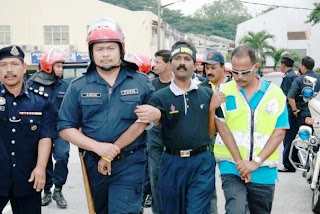 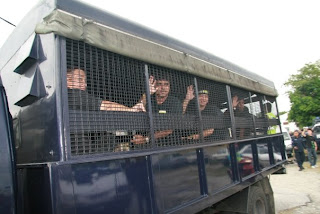 Pakatan Rakyat launched a hunger strike in a bid to get the dissolution of Dewan Undangan Negeri Perak. We believe that the only way to end the fiasco in Perak is by calling in a fresh election.

According to Wikipedia, hunger strike is a method of non-violent resistance or pressure in which participants fast as an act of political protest, or to provoke feelings of guilt in others, usually with the objective to achieve a specific goal, such as a policy change. Most hunger strikers will take liquids but not solid food.

Because of religious belief, our Muslims friends could not participate in hunger strike but in order to show support, they fast according to the Islam teaching instead.

The mainstream media attacked our move, calling the hunger strike 'haram'. Non-Muslims are not obligated to the Islamic teachings, whereby our Muslim participants fast instead of going on hunger strike. It made us wonder how the word 'haram' apply to any of us.

The police attacked us too. What was supposed to be a peaceful and non-violent protest received violent treatment from the police squad. We were merely walking in groups to the courthouse to give our support to the 817 village head chiefs who filed suits against Dr Zambrey for untimely termination of their contract.

Since when was walking in groups an offence? Because we wore black? That was our uniform colour for the hunger strike.

What about the national parade march? They walk in groups and in uniforms too. Should they be arrested?

Every year on Prophet Muhammad's (peace be upon him) birthday, Muslims all over the world and in Malaysia too, walk in groups to the streets singing praises for him. Should they be arrested?

Or we can take the easy way out - ban walking in groups. Hence, no more National Day parade. Saves money, saves time , saves energy and the school kids need not miss any school days for rehearsels and government staffs need not miss precious hours learning how to march.

If I dared to suggest that, I would be called unpatriotic. The extremists would then link it to my origin and condemn me on my ungratefulness that I was made a citizen of Malaysia.

I was arrested along with many others. My right hand was pulled to the back and twisted and left me with pain for a few days. I was'nt the only one who received harsh treatment from the police.

With the many crimes happening daily, mat rempits and snatch thieves roaming our city, hurting and killing civilians, the police found it fit instead to spend enormous time and personnel to watch our every move.
Posted by Chan Ming Kai at 11:46 AM